Trust the leader in multi-fiber technology.

Niedersachsen Ports is the largest operator of public seaports in Germany. At 15 port locations along Lower Saxony's North Sea coast, the company is shaping the port landscape of tomorrow. This includes the installation of a future-proof network infrastructure: In order to be prepared for the ever-growing volume of data in the future, Niedersachsen Ports renewed the building cabling at the Cuxhaven site during ongoing operations, replaced the campus cabling and at the same time realised long-distance connections at bridges, barrages and locks - in some cases under Harsh Environment conditions. For these demanding projects, Niedersachsen Ports relied completely on tde - trans data elektronik GmbH: The network expert not only supplied the passive and active components, but also acted as general contractor. Today, Niedersachsen Ports benefits from 100% reliability and a stable backbone for its cabling infrastructure.

With five seaports, seven island supply ports and three regional ports, Niedersachsen Ports is the port company with the highest number of public seaports in Germany. The company provides the infrastructure for shipping and logistics on site. Niedersachsen Ports manages the entire port infrastructure in the modern multifunctional special port of Brake, the conveniently located junction of Cuxhaven between the North Sea and the Baltic Sea, the modern and efficient universal port of Emden, the tide-independent seaport of Stade and Wilhelmshaven, Germany's only deep-water port, from planning and construction to maintenance. The branch in Norden operates the supply ports for the East Frisian Islands. In the fifteen years of its existence, Niedersachsen Ports has handled around 400 million tons of goods and commodities via its locations and moved more than 139 million passengers to and from the seaports. On average 40,000 ships enter the ports along Lower Saxony's North Sea coast every year. The port operator is equipping itself for the future with innovative projects on digitisation and sustainability. Investment in future-proof, stable networks plays an important role in this.

Ready for the future: Building cabling with the tML24 and tBL-systems

In 2018 Niedersachsen Ports decided to rewire its office building in Cuxhaven. The contract was awarded to tde trans data elektronik GmbH in a tendering process. tde acted as general contractor for the project: The network expert coordinated closely with the customer and its partners in every phase of the project, planned for the shortest possible route, took into account performance reserves for future expansions and migration paths to higher transmission rates and finally installed the building cabling. In addition, tde commissioned Elektro Schulz from Hanover as a partner company to lay the passive cabling and carry out core drilling. This also includes the development of cable routes and the installation of fire bulkheads. In addition, the network expert brought Trading.Point from Bielefeld on board as the IT system house.

After Stefan Röfer, electrical engineer at Niedersachsen Ports, had drawn up the planning for the operational systems, the technicians, under tde project management by André Dierkes, implemented and installed a future-proof fibre optic and copper cabling system based on the tML-24 (for fibre optic) and tBL (copper) systems. In the tML-24 system, the trunk cables and modules of the tML cabling system are fitted with MPO-24 fibre connectors. This means that the complete rear cabling is based on the connector. However, as the connector with two rows of twelve fibres each offers twice the number of fibres as the identical MPO-12 fibre connector, it creates compact performance in a small space. As a result, Niedersachsen Ports benefits from easy migration to higher transmission rates of 1, 10, 40, 200 or even up to 400 GbE or higher. tde, its certified partners and surveying specialists determined the cable lengths in advance and laid pre-assembled fibre optic trunk cables of up to 65m in length throughout the building.

For copper cabling, Niedersachsen Ports relies on the tBL system for structured building cabling in Cat.6A for transfer rates of up to 10GbE in real-time. The tBL cabling route corresponds to a permanent link according to ISO/IEC 11801 (EN50173). For connection, tde has installed RJ45 modules with LID (Light ID) feature: This technology makes it easier to find related ports within a cable route. A voltage can be applied via an injector and causes the respective port LED on the opposite side to light up. Thanks to the modular design, individual RJ45 modules can be replaced at any time without reassembly if damaged. In addition, the port company remains flexible when expanding its network.

In addition to providing and installing the passive network infrastructure, tde was also responsible for implementing and setting up the active components: to this end, the network specialist first carried out a needs assessment together with its system house and technology partners. The aim was to create a secure environment with regard to the strict separation of two networks. To this end, tde installed high-performance edge-core switches and set them up with the help of a system integrator.

The transition to the sustainable building infrastructure went smoothly and had no impact on ongoing operations. "tde did a very good job here," says Stefan Röfer and continues: "The network technicians pulled in the cables preferably at night and replaced the network floor by floor. In those cases where they also had to do this at day during ongoing operations, the restrictions on our work were limited to an absolute minimum".

After the successful building cabling, another project was added end of 2018: "Our campus cabling could no longer cope with the increased demands on the network," explains Rafael Scherer, master electrician at Niedersachsen Ports, and continues: "Instead of turning many set screws at the same time, the new installation quickly emerged as the only sensible option.”

The planning and implementation of reliably functioning long-distance connections requires experience and know-how. Future cabling should take into account high data transmission rates and be resistant to environmental influences. Once the specifications had been clearly defined, the invitation to tender was issued, in which tde from Dortmund was once again successful.

From the end of 2018 onwards, the network expert replaced the campus cabling with new fibre optic single-mode universal cables and connected it to the tBL system. Fibre optic cables score points in primary cabling in many respects: they handle the high volume of data traffic especially in the backbone area without any problems and bridge longer distances in a simple way. The decisive factor for the quality of the connectors is their very low attenuation: tde offers the industry's lowest attenuation characteristics for its MPO connectors with 0.12 dB for insertion loss and at least 35 dB for return loss for OM4 multimode fibres and 0.10 dB and at least 75dB for single-mode fibres. The electromagnetic insensitivity for cabling with fibre optic cables is also a great advantage, as it enables the galvanic separation of buildings: fibre optic cables prevent interference from compensating currents in the event of differences in earth potential between buildings or overvoltage which can be caused by lightning strikes. To avoid the cabling structure having a "single point of failure", companies should also always design the topology of their campus cabling redundantly. This is why tde built the campus cabling of the port company as a ring network. This comprises the most important properties. The network expert implemented the process connection of the individual components and, in a further project phase starting in autumn 2019, also connected (balance) bridges, barrages, locks, the camera system and other buildings such as the harbour master's office and the lock house in Cuxhaven to the new cabling infrastructure. Here, tde worked with the system house Trading.Point to create an easy-to-manage environment, upgrade the network, supply the cabling and switches and carry out the documentation.

Environmental influences as a challenge

Due to the very specific situation at Niedersachsen Ports in Cuxhaven, tde had to ensure that the campus cabling was highly resistant to external influences: "Many cable routes ran through difficult to access and harsh environments: For example, in some cases we had to lay the long-distance connections in cable paths several metres deep through locks and water barriers," recalls André Dierkes, site and project manager, and continues: "At some point we even had to preheat the fibre optic cables in a tent before laying them. There are special cables available for such harsh environments, which are suitable for outdoor installation due to their design. Universal cables with non-metallic rodent protection are usually used here, even if the cables are in the pipe, shaft or cable route. It is also important that the cables have the highest possible longitudinal, transverse or tensile strength in order to prevent damage to the fibre optics in the long term.

Within just four days, tde installed over 3,700 metres of fibre optic cable in the existing empty conduit system, without disrupting the existing infrastructure. Minor difficulties were overcome immediately and to the complete satisfaction of Niedersachsen Ports. Once the cables had been pulled in, they were terminated via splice boxes into the tBL system. tde terminated the fibre optic cables as required in tBL top-hat rail enclosures or distributed them in 19-inch tBL patch panels to make them clearer and easier to handle. Both connecting elements are characterised by their high packing density and optimum fibre management. This means that the permissible bending radii cannot be underrun. In the buildings - harbour master's office and lock house - the completion was also carried out using tML consolidation points: As nodes between the floor distributor and the workstation computer, the freely movable consolidation points can be flexibly positioned in raised floor constructions. In combination with the tML cabling system, they provide optimum accessibility to the necessary connections and consistently increase the flexibility of the cabling. Same as with the cabling in the building, tde also used tde RJ45 modules with LID feature as the connection technology for the wide area cabling. 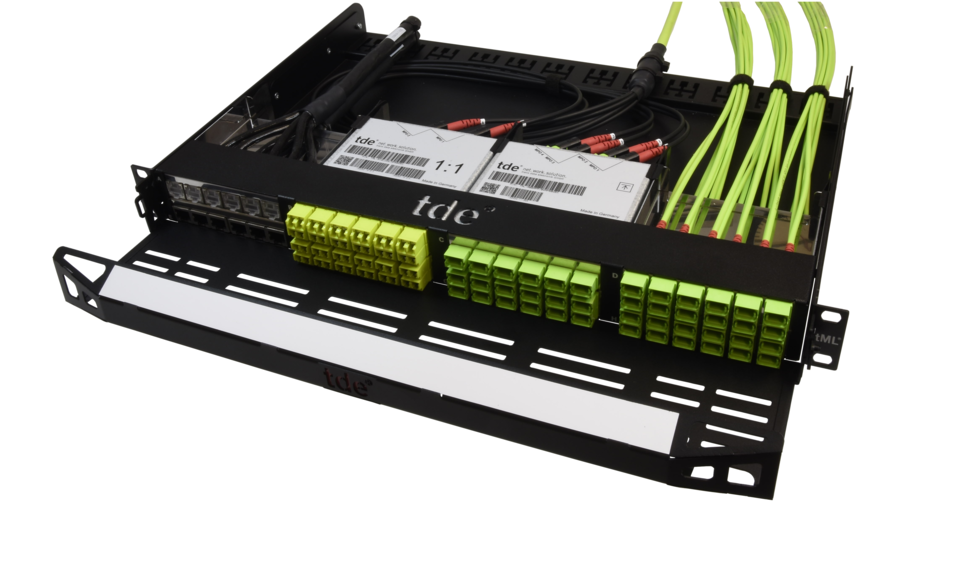 The campus cabling was carried out by tde in accordance with the requirements of structured cabling as per DIN EN 50173: It is based on a uniform approach, takes future requirements into account and provides power reserves. "Our aim is to offer our customers the best possible commissioning and 100% reliability," says André Engel, Managing Director of tde. "Customers receive conclusive documentation of all processes and benefit from a system guarantee of 25 years on our cabling solutions".

"The expectations placed in tde were very high and the conditions were challenging," says Scherer, and continues: "tde is a quality provider on whom we can rely completely even in difficult situations - for example, when there was water in the empty pipes or the meter readjustments had to be made. We are very satisfied that we realised the project with tde. They offer a very high quality . The price-performance ratio is right. And the system guarantee of 25 years gives us security for the future".

We use cookies on our website to offer you a better user experience. In addition to the necessary cookies, which ensure the use of our website, you have the option of voluntarily agreeing to the use of further cookies in order to be able to use our website to its full extent.